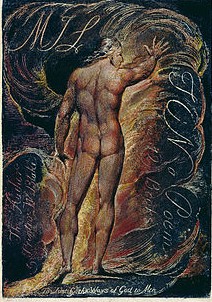 TO bathe in the waters of Life: to wash off the Not Human.
I come in Self-annihilation & the grandeur of Inspiration,
To cast off Rational Demonstration by Faith in the Saviour,
To cast off the rotten rags of Memory by Inspiration,
To cast off Bacon, Locke & Newton from Albion's covering.
To take off his filthy garments & clothe him with Imagination,
To cast aside from Poetry, all that is not Inspiration
That it no longer shall dare to mock with the aspersion of Madness,
Cast on the Inspired by the tame high finisher of paltry Blots:
Indefinite or paltry Rhymes: or paltry Harmonies:
Who creeps into State Government like a catterpiller to destroy,
To cast off the idiot Questioner who is always questioning,
But never capable of answering, who sits with a sly grin
Silent plotting when to question like a thief in a cave:
Who publishes doubt & calls it knowledge: whose Science is Despair:
Whose pretence to knowledge is Envy: whose whole Science is
To destroy the wisdom of ages to gratify ravenous Envy,
That rages round him like a Wolf day & night without rest.